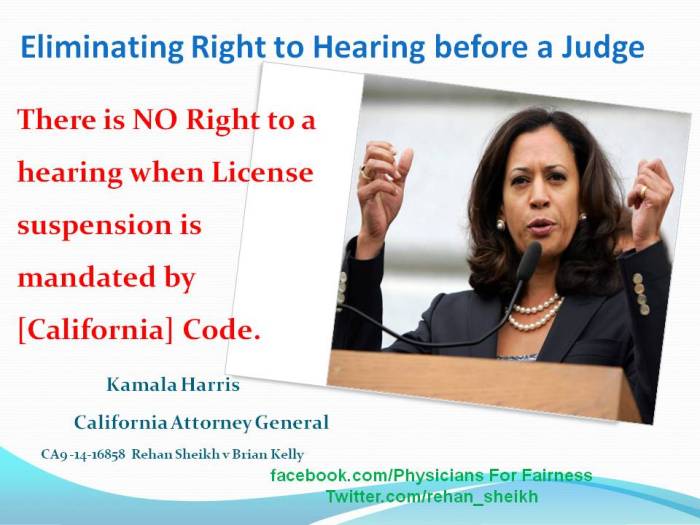 California Department of Motor Vehicles (DMV) issued an anonymous letter dated December 5, 2011, and suspended plaintiff’s driving license effectively January 4, 2012 without any hearing before any Judge. The DMV never sent any Notice of accusations. In that ‘Order of suspension’, the DMV alleged an unspecified Failure to Appear (FTA) presumably for an alleged STOP sign violation. For over a dozen times, during next few months, Plaintiff went to multiple DMV offices and San Joaquin County ‘Superior Court’. Multiple hearings were held before San Joaquin County Judge Erik Lundeberg on an alleged STOP sign violation. But the DMV continues to allege an unspecified Failure to Appear (FTA) and refuses to re-instate the license.

The DMV refuses to provide any information when was the Failure to Appear (FTA)? The DMV claims that it does not have Burden to prove its accusations of FTA. The DMV denies any hearing before a DMV judge who could restore driving license. It’s like locking someone and throwing away the key… Such a misconduct for Driving License suspension is unheard of in any modern democratic country. It is done to the United States citizens at a time when California is issuing Driving Licenses to illegals from Mexico and other countries.

1. Does the DMV has a mandatory duty, in order to satisfy the Due Process Clause, to provide a hearing on suspension of plaintiff’s driving license?

The DMV arbitrarily and intermittently demands that plaintiff take written test, driving tests and submit to medical tests. The DMV doesn’t demand such ‘reexamination’ for renewal of license or even when individuals are involved in auto accidents. The DMV denied requests for any hearing that would establish justification for its demand.

2. Is the DMV’s arbitrary demand for plaintiff’s driving and medical tests consistent with Equal Protection and Due Process Clauses?

The proceedings and hearing before the United States Magistrate Judge Hon. Allison Claire revealed that California does not have any process to challenge suspension of Driving License. The Judge ruled;

California’s Response in the Ninth Circuit Court of Appeals

“The Fourteenth Amendment does not require the DMV to provide [Plaintiff] with an administrative hearing to review his license suspension.”

FTA; Who is mistaken? The DMV or the County Court?

2) After plaintiff filed this lawsuit in 2014, the DMV issued multiple written Notices claiming that; plaintiff ‘Failed to Appear’ at the County Court.

California Courts do not issue a proof of attendance or may not properly record attendance when a driver attends a court hearing for a traffic citation. The court may ignore to note attendance or may not properly save records. Even if  a driver can somehow show a written proof from the County Court, the DMV is NOT authorized to recognize such written proof. Any driver in California can be a victim of such a ‘mismanaged policy’. The DMV continues to allege plaintiff with an unspecified FTA and refuses to issue Driving License.

Plaintiff’s Motion for Declaratory Relief – Violation of Due Process

Plaintiff submitted a Motion for Declaratory Relief that defendants denied plaintiff’s Right to Due Process by suspending his driving license without pre-deprivation and without post deprivation hearing. Defendants did not present any opposition and stated; “ [A Court may] issue other appropriate relief when nonmovant cannot present facts essential to justify its opposition”.

Due Process, although it does not prevent injustice, it is a process that offer a possibility of Justice. The American Courts have held that , at the minimum, the Due Process requires a Notice of Accusations and a hearing before a Judge. Here the DMV denied to perform even the minimum requirements; a Notice of accusations and a hearing before its own judge. what’s could be wrong with that? This was expected that the federal court would immediately grant such Motion that a DMV judge must hear the case but disappointingly the federal Court did not even issue its opinion on this important point.

How the District Court dismissed the case?

The United States Judge Hon. Garland Burrell did not even mention the keywords “Driving License” or “Due Process” in his short order dismissing the case without any guidance on any of the issues.

That was the third lawsuit form plaintiff’s family that United States Court in Sacramento dismissed without a merit hearing. Those cases involved California Medical Board, San Joaquin county Hospital and the DMV. In each case, ‘state actors’ submitted Motion(s) to dismiss in violation of the FRCP 12, submitted records or secret records and the Court engaged in fact finding without giving any opportunity to plaintiff’s. Those Cases were heard by Judge Frank Damrell, Judge Morrison England and Judge Garland Burrell. The Hon. Frank Damrell took early retirement a couple of years ago. For a list of early retirements and resignations, see the web page PhsicianForFairness.com

California’s Policy of Driving License Suspension is motivated towards extracting money from People; NOT to make Roads safe

Lets take a moment to review California’s policies of Driving license suspension… California’s polices of automatic driving license suspension (for Failure to Appear and Failure to Pay) are motivated to extract money from American people. Such suspension primarily benefits insurance companies who charge extraordinary amount for providing insurance. As a result of such suspension, money is transferred from people to the insurance companies.

Does California automatically suspend driving licenses of all those who are involved in auto accidents? Answer is No. Does California automatically suspend license of drivers who are involved in DUI?  Answer is again No. A Stockton City Council member who was cited for DUI didn’t have his license suspended. Stockton Police drove ‘wild’, ‘sprayed’ thousands of bullets and killed innocent hostages on the roads of Stockton making roads unsafe. Their driving license was not even under considered for suspension.

Suspending driving license merely for a ‘perceived’ failure to appear before a third party county court does not make our roads safer. Suspension of driving license would only make it cumbersome for the people to travel to the court. Isn’t that common sense…?

Is this a good Public Policy to Suspend Driving License for Failure to Pay?

One can loose Job for suspension of Driving License. If one looses Job, then it would be even more difficult to pay traffic fines.  Does it makes sense to suspend Driving License for Failure to Pay? John Oliver does not think so… Now the issue is before the United States Judges for their ruling.

John Oliver researched California’s traffic fines and termed them excessive. Although California Legislative authorized $35 fine for a STOP sign violation, the California courts charge $200-$500 extra from each individual, without any authorization.

Gov. Brown issued Driving License to illegal immigrants who Failed to Pay & Failed to Appear ; Shouldn’t such privilege be available to American people?

On one hand, California is ‘distributing’ Driving License to illegal immigrants who broke laws, who do not have the Right to be present in the United states, who Failed to Appear (FTA) before Authorities and Failed to Pay (FTP) immigration fees and fines. But, on the other hand, it suspends driving licenses of American people only for excuses of Failure to Appear and Failure to Pay.

Gov. Jerry Brown acknowledges the importance of Driving License when he talks about illegals but shows no such compassion for driving license of American people. At the minimum, the Governor should consider Equal Opportunity to the United States citizens; the opportunity that California happily provides to illegals or undocumented people from other countries.

When [ illegal] immigrants are able to work legally—even for a limited time—their wages increase, they seek work compatible with their skill level, and they enhance their skills to obtain higher wages, all of which benefits State economies by increasing income and growing the tax base.

This should also be true for American people. If American people are allowed to legally drive and legally work, all of that benefits State economies by increasing income and growing the tax base.

Plaintiff is seeking representation. It’s a rare opportunity to plead for a Due Process case involving suspension of driving license. Please contact.

Plaintiff invites interested professionals and Legal Blogs covering Ninth Circuit Court of Appeal for their opinion on the issues.

Protection of Public or Violation of Rights???